Banking the Way it Ought to Be 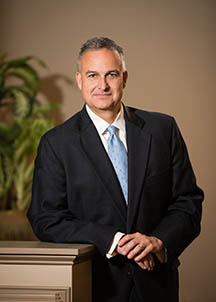 “On behalf of the board of directors, we are pleased to have Mr. Kyle Thomas as the new President and CEO of the Blue Ridge Bank,” stated Jesse Neville. “He brings an array of skills and experience that will be a vital asset to the overall growth and success of our bank. We look forward to seeing him play a major role not only in the bank, but in the community as well.”

Mr. Thomas is a graduate of Clemson University and the Graduate School of Banking at LSU. He comes to Blue Ridge Bank with 28 years of experience in the banking industry. Much of his career has been in Upstate South Carolina; most recently at the Carolina Alliance Bank, and the former Seneca National Bank in Seneca. He has also served in multiple roles at the South Carolina Bankers Association, including Chairman of the Economic Development Committee, member of the Community Bankers Council, and member of the Federal Legislative Committee.

Mr. Thomas is actively involved in the community as a current board member of GHS Hospice of the Foothills, a member of Seneca Rotary Club, and a former chairman of the Oconee Medical Center Foundation. Mr. Thomas is a native of Pickens County and he, his wife and children reside in Clemson.

“It is an honor to be chosen to serve as President and Chief Executive Officer of Blue Ridge Bank,” said Mr. Thomas. “This bank has a proud history and I intend to work closely with each employee and the management team to strengthen our success in Oconee County.”

Blue Ridge Bank is holding an after-hours event on October 6, 2016 from 5:30pm until 7:30pm in Seneca at the Bountyland office. The community is encouraged to stop by and meet Mr. Thomas and his family.